N. Malone Mitchell 3rd
Chairman of the Board and Chief Executive Officer

Bob Alexander, a member of our Board of Directors, passed away on Sunday, April 5, 2020. He was surrounded by his wife, Donna Kay, and family whom he loved and admired.

A third-generation oilman, Mr. Alexander led a storied 60-year career, culminating in founding his own company, Alexander Energy Corporation. His passion for the industry led him to steadily rise in the ranks of various companies, starting as a frac engineer and eventually becoming Chairman and CEO of National Energy Group.

Mr. Alexander was a man of many accomplishments and passions: a Korean war veteran, a true OU Sooner fan, an athlete, a coach, an avid sports enthusiast, a master golfer, and a gin player; but, most importantly, he was a loving man to his family. He was also a wonderful storyteller and a true friend.

Ever the optimist, Bob saw the good in every detail, every person, and the world. He will truly be missed by all those who had the opportunity to know and work alongside him. 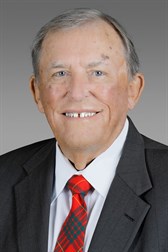